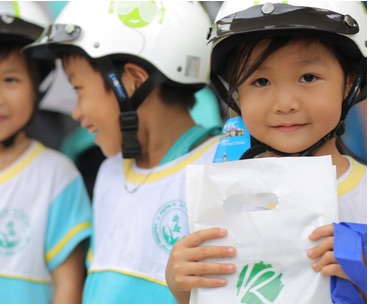 Vietnam is a nation that is no stranger to hardship. Outbreaks of dengue fever, hand, foot & mouth disease or cholera are not unheard of. In 2011, hundreds of children died because of hand, foot and mouth epidemics. While these are all in- credibly tragic causes of death in Vietnam, particularly amongst children, there is another prevalent and tragic killer here: driving on the streets of Vietnam. This is often referred to within Vietnam as the ‘hidden epidemic’ , as it is becoming an increasingly serious problem with deadly consequences.

The vast majority of the population uses motorbikes or scooters as their main form of transport - this represents 95% of regis- tered vehicles in the country (2012 data). Rapid economic growth has led to a spike in vehicle ownership in recent years, and roads and traffic policing have not been able to keep up with the escalating num- ber of drivers on the road.

As of 2010, the World Health Organisation (WHO) released a list of the number of road-related deaths per 100,000 people. Vietnam was up near the top of the list at 24.7 per year - close to five times the rate of road deaths in Australia. The Ministry of Public Security reported over 11,000 deaths for 2010 while the Ministry of Health registry reported some 15,464 deaths. Other sources suggested these figures have been downplayed and that traffic deaths account for an even higher percentage than this. Very sadly, a large portion of those killed are children under the age of 19.

However, there have been several steps taken towards improving road safety, including the implementation of a helmet law in 2007 applicable for government of- ficials and then applied to the wider popu- lation in 2008. However, many drivers just ignore the regulation and drive without a helmet, only putting one on when driving through an area known to have police. The motivation of helmet use is typically to avoid a fine, rather than protect life. Further undermining the effectiveness of this law is that children under 14 are exempt, and if helmets are used they are typically made of low quality plastic that doesn’t offer adequate protection. The latest estimate from WHO suggests some 80% of helmets made and sold in Vietnam fail to meet national quality standards.

For the team at AOG World Relief Viet- nam, the volume of road related injuries and deaths, particularly amongst children, is unacceptable. In response to this situation we launched our Adopt-A-Helmet campaign, which goes hand in hand with our Life Skills: English Camps.

As part of the English Camp curriculum, children from pre-school age and up into high school learn about the importance of road safety. They learn about the very real dangers of the road and how wear- ing a helmet can radically reduce their chance of injury. Children also learn how to correctly wear a helmet through a series of funny demonstrations on what not to do. They take turns riding bicycles wearing helmets (after putting them on correctly) and apply some of the basic road safety tips that they have learned. Finally, each child is given an adjustable high quality helmet (so they can wear it for many years to come) that we have had made to size by an internation- al-standard helmet manufacturer.

We encourage the children to wear their helmets at all times on the road, whether on motorbikes or bicycles, even though the current laws do not dictate that they have to. We have seen an encouraging take-up rate in the communities we work with. We have even seen parents using the helmets after dropping their children off at school!

Over three days this month, we have been able to deliver 150 helmets to two different communities at a Kindergar- ten and then a Primary School. Without training and the investment of these helmets, these children could easily be part of the list of injuries or fatalities each year. So thank you to our RAISE partners who are making it possible for us to give these children a means of protecting their life. Your partnership with communities is making an incredible impact!