THE CAUSE: Holistic Development Part 2 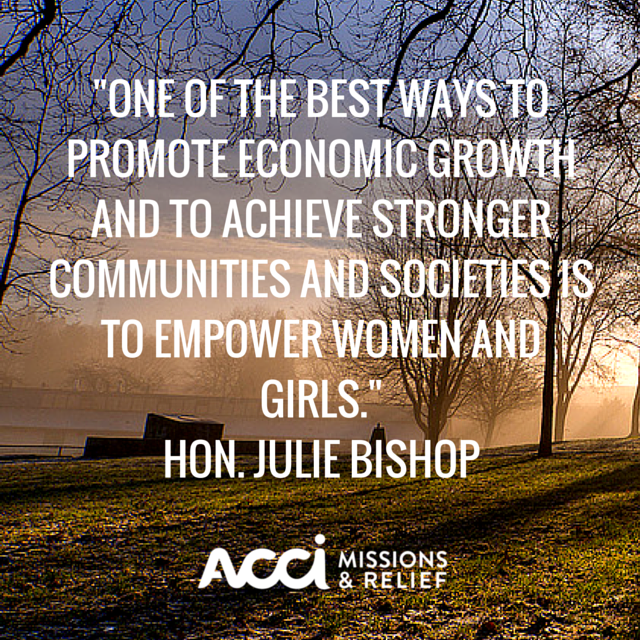 It is well recognised that men and women do not benefit equally from development activities due to gender bias and inequality. Differing priorities and obstacles for women and men can greatly affect women’s involvement, reduce opportunity to benefit from programs and minimise potential leadership roles within their community.

Overwhelmingly, it is women rather than men who experience these gender-based forms of exclusion and discrimination. Without their voice, the way in which development priorities are determined becomes skewed, hampering efforts to achieve holistic change.

Holistic change, by definition, needs to impact all of society at multiple levels - not just the dominant social group. Effective development and change requires an understanding of both women’s and men’s roles and responsibilities within the community and their relationships to each other (1).

Furthermore, community change requires the ongoing participation, support and active involvement of all affected people. Development programs cannot succeed or be sustained if women and girls are held back from participating and decision-making.

Beyond a focus on development initiatives that specifically target women, the promotion of gender equality necessarily involves men in order to accelerate community acceptance, changes in attitudes and beliefs about women’s rights and capacities (2). Managing household finances is a basic example of equality in decision-making. Women’s spending habits differ notably from men’s, in that women are likely to invest significantly more (some studies suggest over two times as much as men (3)) in things that improve family welfare such as food, health and education. However, in many cultures women are excluded from this basic form of decision-making, and will not gain an equitable share of responsibility and leadership in household finances without the participation of men. Therefore, giving attention to men’s roles, attitudes and behaviour is an important element in tackling some of the causes of women’s low status and particular development problems.

A deliberate focus on women’s rights and empowerment in overall development programs is needed to achieve holistic change and progress. Addressing gender-based inequality has enormous potential to create change at local, national and regional levels.

One of our development goals at ACCI is to address gender disparity and inequality. Throughout our projects and programs, we work to recognise both men and women as equal participants, beneficiaries and decision makers.

1. Guide to Gender and Development. DFAT. Accessed at: http://aid.dfat.gov.au/Publications/Documents/guidetogenderanddevelopment.pdf