THE CAUSE: Holistic Development, An Impossible Goal if Half are Held Back 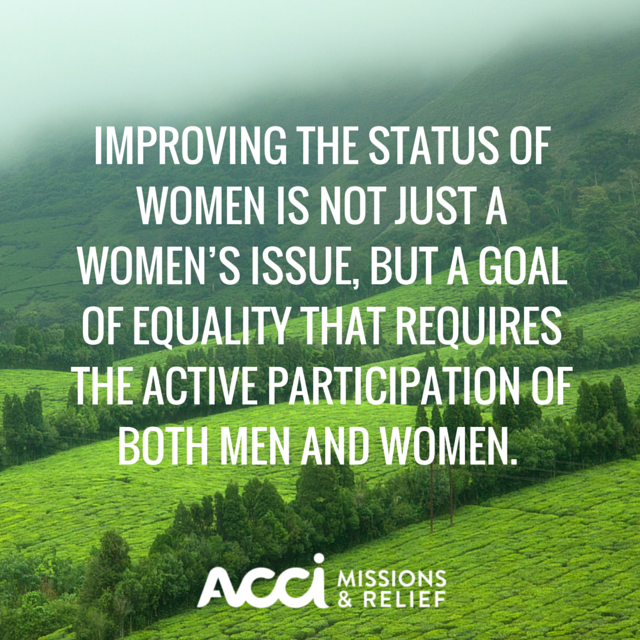 “One of the best ways to promote economic growth and to achieve stronger communities and societies is to empower women and girls.” Hon. Julie Bishop, Minister for Foreign Affairs and Trade. Improving Economic Outcomes for Women, 2014.

There is neither Jew nor Gentile, neither slave nor free, nor is there male and female, for you are all one in Christ Jesus. If you belong to Christ, then you are Abraham’s seed, and heirs according to the promise. Galatians 3:28-29

Here's a curious question - Why would it be that feminine-names hurricanes kill about twice as many people as similar-strength hurricanes with a male name?

Research from the US shows that out of comparable strength hurricanes, those named after women (Eloise, Laura, Hanna) do in fact lead to significantly more fatalities and casualties as hurricanes named Kyle, Arthur and Marco. It appears that subconscious gender bias leads to the general population underestimating the strength, power and force of female named weather events (1). This leads to lax preparations and precautions, hence a higher rate of casualties.

While this is an absurd example of the effects of unconscious gender bias, something much better researched and documented, yet even more damaging, is the larger scale devaluing of women around the world. This occurs to such a great degree that multiple millions of abuses and deaths every year are attributed to gender-based discrimination and violence.

The Bible tells us that men and women were created equally in the image of God, yet cultures all around the world, including our own, reflect various forms of gender biases and discrimination. These injustices vary in severity, and range from relational (such as domestic violence) to systemic and structural (such as gender pay gaps). These social biases and beliefs about unequal value and worth may be explicit, intentional, irrational, perhaps subconscious or even normalised within particular systems or cultures. Throughout the world this results in:

Extreme forms of gender-based violence, abuse and killings, are sadly too common in too many countries today. Shamebased or ‘honour’ killings, infanticide, dowry deaths and trafficking come about through the systemic devaluing of women. Human rights are not upheld, and equality is far from reach in everyday interactions.

In many places girls are not considered as worthy of education as boys. There are 33 million fewer girls than boys in school today because of this (2). By missing out, these millions of girls face a lifetime of marginalisation and unequal opportunity to succeed. Limited healthcare access is also reflected in maternal mortality rates around the world. The number one cause of death for 15-19 year old girls worldwide is childbirth (3).

Unequal loads between men and women of unpaid care and household work limits the kind and type of paid work women can undertake. Without education they are left with a choice between turbulent and unpredictable income through informal work such as food stalls, or exploitative conditions in the formal sector, such as factory work. In developing economies today, women make up 85-90% of sweatshop workers (4).

• Minimised opportunity for leadership in decision making at all levels.

Various obstacles exclude women from leadership and decision making, from a household level in managing finances, to a national level of equal representation in decision making. Even in Australia’s democratic parliament which represents the whole population - half of which are women - we consistently have less than one-third of all parliamentarians and one-fifth of all ministers as women (5), numbers which are hovering at or below UN recommendations. It is not just this end result which is unbalanced, but the leadership development pathways to get to this point are often missing for women in male dominated workplaces or cultures.