THE CAUSE: More Crippling than Corruption - The Injustice of Tax Evasion 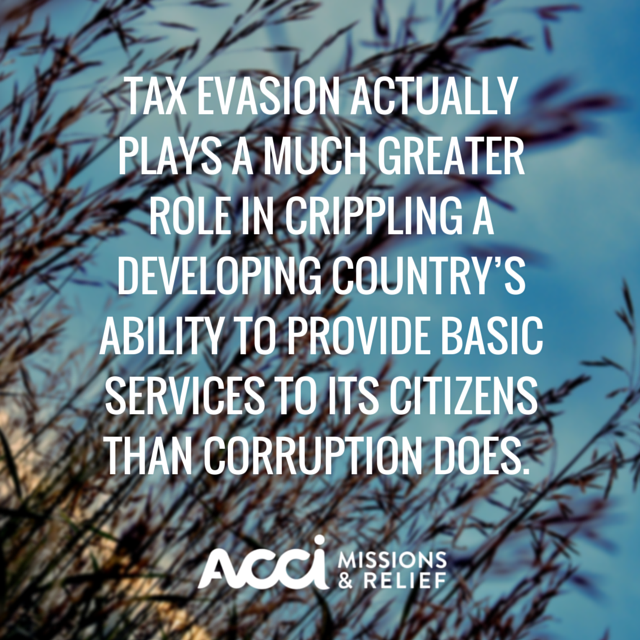 "The people of the land have practiced extortion and committed robbery. They have wronged the poor and needy; they have oppressed the foreigner who lives among them and denied them justice." Ezekiel 22:29

“Persons are what matter, but systems shape persons in profound ways. The structures and systems matter, but they’re not all important. We care about the systems because we care about persons.” Ron Sider, founder and President of Evangelicals for Social Action (ESA), author of Rich Christians in An Age of Hunger

Independent! Self-made! Creative genius! Yep, it’s nice to think of ourselves in this way, but is the idea of a totally self-made man an illusion? Close to it. This approach can overlook the more invisible support systems and external factors that make great achievements possible.

A successful lawyer? Depends on impartial, state funded legal systems. Additionally, he or she would have received state subsidised education at primary, secondary and tertiary levels. At many times they would have trusted in the healthcare system - to get their appendix removed, or to have their child delivered safely, or to rehabilitate their ill and aging parents so they can continue to work. Personal creativity, intelligence and hard work of course contribute to success. Yet these factors don’t remove our interdependence with the state and the society around us.

Tax, though rather a dull subject, is an absolutely essential cog in the wheel of a well-functioning society. Healthcare, education, law enforcement, roads, regulation and distribution of natural resources - all these are essential components of human health and well-being that are fuelled by tax contributions.

Though we surrender (perhaps begrudgingly!) a portion of our personal income to support these services, a huge chunk of tax income for governments comes from big business. It takes some serious regulation and monitoring to ensure a fair portion of tax is received this way, especially from multinational companies.

But what about developing countries, who may have weaker regulations and fewer resources to enforce taxation? What happens to public services for communities when big companies who exploit their resources and people fail to return a fair portion of profit?

In practice, many businesses aim to pay as little tax as possible, especially in developing countries where it is easier to evade. They do this with little regard for the social consequences for already marginalised populations. Big businesses located in Asia and Africa typically move their profits offshore to minimise their tax bill, while local governments are left with very little revenue. In effect, they are robbing the citizens of the country they have profited from, denying them access to the basic rights and public services that taxation enables. This leads to inequality of opportunity, hampering both individual and community efforts to succeed and prosper.

Tax evasion actually plays a much greater role in crippling a developing country’s ability to provide basic services to its citizens than corruption does. Without access to their fair income stream of taxes, developing countries are severely limited in the public services they can provide, including education, healthcare and access to clean water. This hampers development; undermining progress that aid efforts by the international community hope to support. In fact, developing countries loose far more money to tax evasion that they receive in aid funding.

More and more in the development sector, calls are being made for the roll-out of effective international tax rules so that poorer countries are not cheated out of their fair share of tax revenue. Research by Christian Aid found such tax dodging costs developing countries at least US$160 billion in lost tax revenue each year. It is estimated that if these tax losses had been used in the same way as the taxes actually collected it would have saved the lives of 350,000 children (1).

“Together, the total tax loss by emerging and developing countries is more than the annual global development aid budget and much greater than the US$42-63 billion the World Bank estimates will be required annually to meet the millennium development goals aimed at halving extreme poverty.” Christian Aid (2)

A strong basis of public services, funded through fair taxation, can support a well-functioning society that protects the rights of citizens. In turn, individuals and communities are supported to determine their future of continued development and progress. Government funded services will always be required, and it is necessary that a developing country can build their own capacity to provide this, so that continual and viable development can take place in-country.